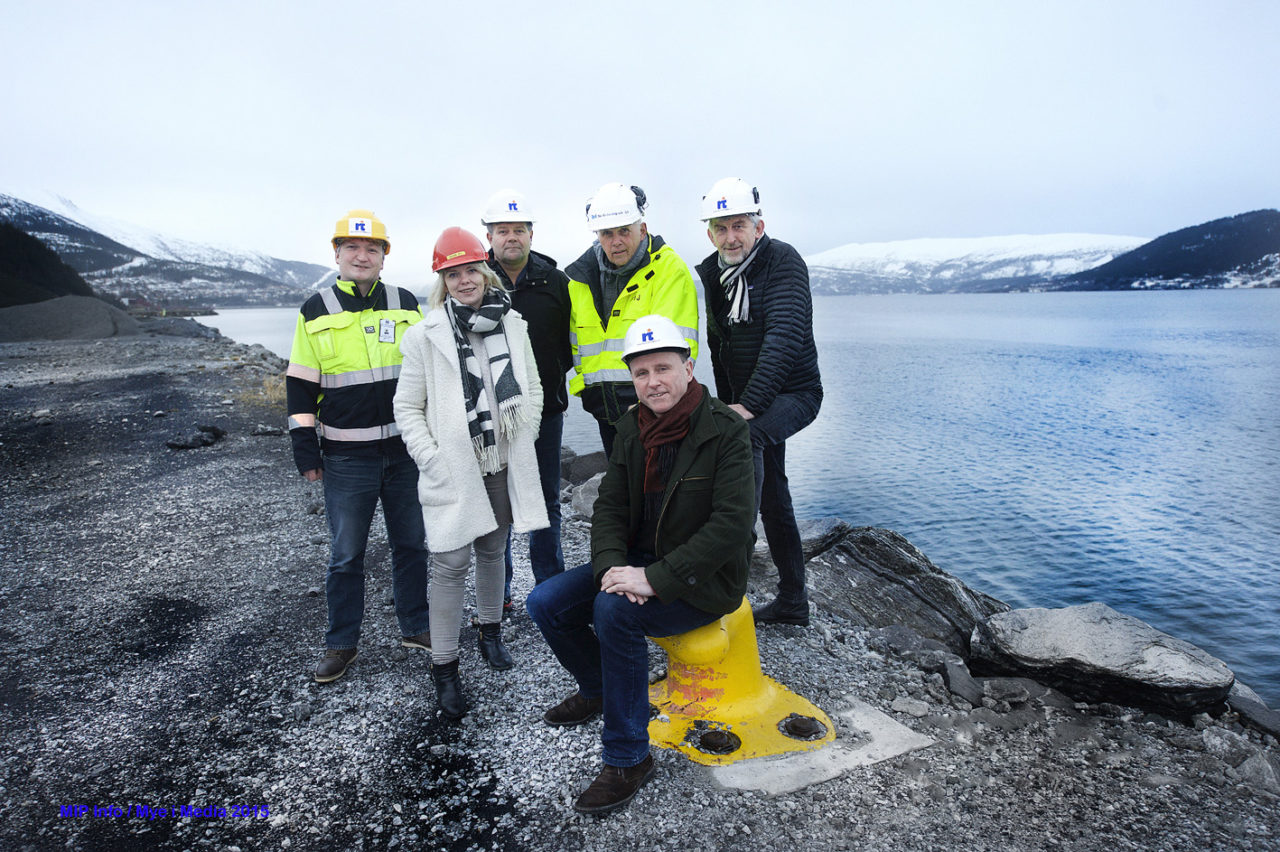 From left: Alf A. Øverli (Rana Industriterminal AS), Annfrid Olsen (Rana Utviklingsselskap ASERU), Herman Breiland (Mo i Rana Havn KF), Rolf H. Jenssen (Mo Industripark AS), Reidar Ryssdal (seated, RU) and Ole Petter Rundhaug (municipality of Rana) are of the opinion that a deepwater quay would provide a major boost for the Port of Mo i Rana.

In-depth partnership for boost to port

A deepwater quay worth NOK 250 million may herald the start of a closer partnership between the two quay owners in Rana.

A deepwater quay is one ship’s length nearer to becoming reality now that Mo i Rana havn KF, Mo Industripark AS (MIP AS) and the municipality of Rana have looked at the possibility of a joint project. The conclusion of a feasibility study that was completed recently is that the quay owners want a deepwater quay to be constructed as quickly as possible, ideally by sometime in 2019.

The stakeholders involved are now proceeding with phase 2 of a pilot project, which has three objectives:

*     Implementation of the quay project as a publicly owned or publicly accessible quay. Three alternative models for ownership and operation are being investigated; owned by MIP AS, owned by Mo i Rana havn KF, or owned by the two owners together.

*     Production of a knowledge base for greater cooperation and integration at the Port of Mo i Rana.

*     Production of a foundation for assessment of an intermunicipal port partnership.

At present, the waters off the quay at Rana Industrial Terminal are eight metres deep. This is not sufficient for really major projects. When Wasco was supplying pipes to Polarled, they had to resort to costly backup solutions and reloading. Among other things, the lifting capacity at the industrial terminal was insufficient and presented challenges before and during the loading of Momek’s suction anchors.

The recommended deepwater quay option will have a sea depth of 18 metres. A longer quay than the present one is also needed, and the project is planning to implement a quay 200 metres long, with the option of extending to 400 metres. Development towards increasingly larger ships means that if no new quay is implemented, the challenges will go on spiralling.

“If we are to pave the way for new industry in Rana, it is particularly important to put a deepwater quay in place,” says Arve Ulriksen, CEO of MIP AS.

“Many of the stakeholders who get in touch with us with a view to setting up here calling for better port facilities,” explains Rolf H. Jenssen, project manager for the same company.

Close proximity to the railway and easy access to the E6 and E12 are also cited as features that will provide major development opportunities when establishing a deepwater quay.

Joint funding involving the public sector and industry is envisaged as a means of financing the project. Work on achieving sufficient sea depth will represent a substantial portion of the cost, and government funding is primarily envisaged for this.

The Norwegian Coastal Administration, the organisation responsible for development of the shipping channels, provided some of the finance for the feasibility study. The next step in the process is to launch a partnership with the Norwegian Coastal Administration relating to the project so that it is possible to compile decision data over the course of the coming year; by devising a good concept, but also by working to ensure that the project is given political priority.

“We have to work hard in order to achieve this. In particular, bringing everything together as quickly as we would like may present a challenge,” says Reidar Ryssdal of Rana Utviklingsselskap AS.

The deepwater quay will be established in the area to the south-west of  Rana Industrial Terminal and will have 150,000 square metres of disposable area within the quay.

“Ports which see growth and development are generally the ones with large areas adjacent to quay facilities where things can be stored and new industry can be built up. Hence this ‘back area’ is important,” says Herman Breiland of Mo i Rana havn KF.

The concept preferred by MIP AS involves a quay with cells formed by sheet piles, which is estimated to cost around NOK 250 million. The investment cost includes the quay itself, deepening the shipping channel, infrastructure and lifting equipment.

There are large volumes of contaminated material on the seabed at Ranfjorden as a result of the mining industry of the past, as well as the operation of the Coking Plant and Norsk Jernverk. It is anticipated that it will be possible to use this material adjacent to the quay.

“It will be necessary to remove this material responsibly before the clean material can be dredged. In this respect, the government will have to take responsibility for the contamination that it has caused via its companies. We are planning to place this material inside the cells formed by the sheet piles,” says Rolf H. Jenssen.

“This will allow us to clear up the inner part of the fjord and use the material for something that will benefit society,” adds Arve Ulriksen, referring to the deepwater quay project as part of the MIP AS Sustainability project. Not just because of the cleanup in the inner part of the fjord, but also because an onshore power plant will be constructed so as to supply ships with green energy and permit the use of electric cranes.

As well as developing a deepwater quay as a joint project, the organisations will also be continuing their work on potential partnership solutions or integration between the two port owners. Visits to the Port of Borg and the Port of Grenland have taken place as part of this initiative.

“These ports see a great deal of industry-generated activity and so share similarities with Rana. At the same time, these two ports have made a great deal of progress when it comes to the development of partnership,” says Ole Petter Rundhaug, assistant chief officer at the municipality of Rana.

“This is a demanding job in terms of finance. Many major projects have been implemented through partnership at a municipal level,” says Arve Ulriksen, citing the expansion of industrial quays in Salten and Mosjøen.

“This is why we consider it absolutely necessary to have the municipality and municipal stakeholders on board – so that we can bring a project like this to fruition,” says Ulriksen.

“Partnership is vital for this project, with everything this means in terms of future development and growth, but closer cooperation between the various stakeholders at the port on a general level is also beneficial. We have a number of joint interests and face a number of shared challenges that we will resolve more effectively if we work together,” says Alf A. Øverli, general manager at Rana Industriterminal AS.

The area off Toraneskaia has already been dredged and is included in the National Transport Plan. This project, which is estimated to cost NOK 58 million, may be completed as early as 2018 and will result in a shipping channel 12 metres deep. The opportunities for coordinating dredging as part of these two projects will be considered as part of the ongoing work on the deepwater quay at Rana Industrial Terminal.

“This could give us a win-win situation, where material excavated from the seabed is used to expand the industrial areas at the Port of Mo i Rana while also removing contaminated sea bed. However, to achieve this kind of coordination, we need to make sure it does not delay the improvement of the shipping channel at Toraneskaia,” says Herman Breiland.

FACTS Port of Mo i Rana

*     Two major port owners – Mo i Rana havn KF, owned by the municipality of Rana, and Mo Industripark AS

*     Mo i Rana havn KF owns two major port facilities; Toraneskaia and the Bulk Terminal. MIP AS owns the biggest port section, Rana Industrial Terminal, as well as being the official owner of the Rana Gruber shipping terminal, which is operated and developed by the mining company itself

*     Over the next few years, growth is anticipated through local metal production, offshore