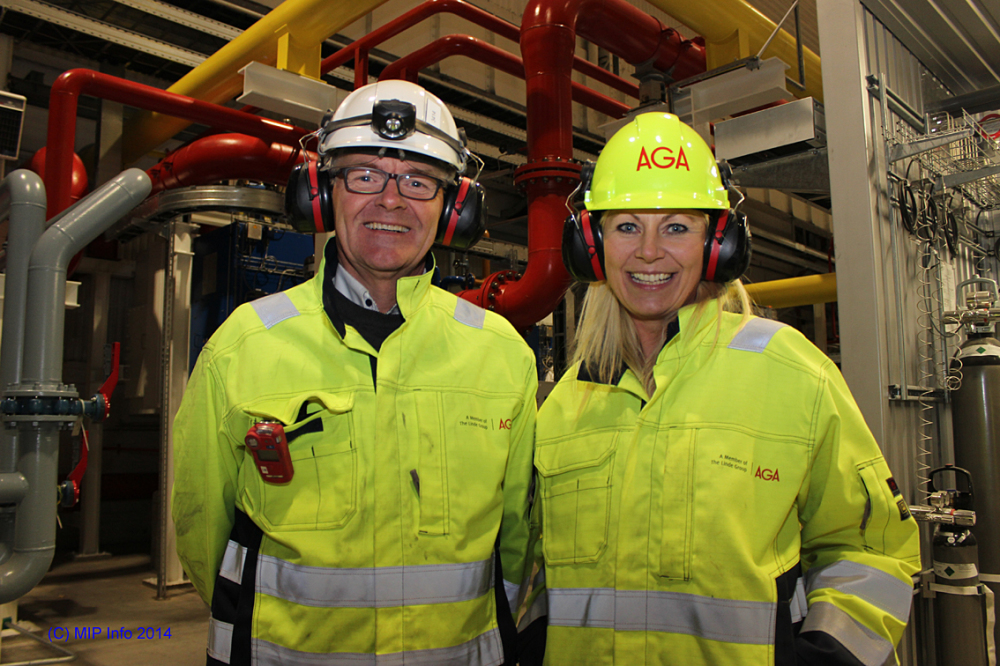 – Establishment of the new air gas factory at Mo Industrial Park has gone very well in terms of time, technical considerations and other factors.

Good plant operation is now in place, giving us the potential to supply to more customers in future. This plant has been constructed to allow us to supply air gases to others besides our main customer, Celsa Armeringsstål AS.

These are the words of Jostein Thomassen, Head of Sales and Marketing at AGA Norge AS.

He adds that when AGA establishes production plants like the one at Mo Industrial Park, they prefer to design them to cope with a greater volume than the local requirement.

– This is why we now want to forge links with more customers in a range of industries such as food processing, fish farming, processing, offshore, building and construction, he says.

AGA and the industrial environment in Mo i Rana have worked together for several decades, initially with Norsk Jernverk AS and later with Mo Industripark AS (MIP AS). AGA has purchased air gases from the former MIP AS air gas factory, AGA has supplied acetylene to MIP AS, and they have also worked together on the sale of machinery and equipment.

– In our experience, good access to large volumes of air gases attracts new activity for both existing and new enterprises. This is a vital element in the overall infrastructure provision for an industrial cluster like Mo Industrial Park. Hence we share an interest in profiling the opportunities provided by the new air gas production plant at Mo Industrial Park,” says Thomassen. “AGA already supplies products from plant at MIP to sites as far north as Hammerfest. They also supply to all Elkem plants, and from their plant at MIP they supply to Elkem Salten AS. Medical gases will also be supplied by the plant at MIP in the near future, he says.

AGA has four plants for the production of air gases in Norway and several more in Scandinavia and the Baltic countries. Air, electricity and cooling water are the input factors at the plant. The cooling water in Mo i Rana is generally of high quality.

Safety and the environment are always very much in focus at AGA. Having more production plants will ensure that products are transported to end users as quickly as possible.

Part of the plant in Mo is also sited at what used to be the profile rolling mill, where the metal furnace used to be. This is a state-of-the-art air gas plant with four employees who are involved in an on-call scheme providing cover 24 hours a day. The plant is controlled locally, but it can also be controlled remotely from the central plant in Avesta. There are two storage tanks next to the plant, the larger one for oxygen and the smaller one for nitrogen.

The plant at MIP has only one compressor at the production plant for air gases, which is an innovation. This is the first AGA air gas plant to have just one compressor, as most of them have two.

There are two machines which dry the air coming from the intake. The intake is sited above the roof. The air then passes through a filter system before being cooled to minus 196 degrees in the distillation column. This is done in order to separate oxygen and nitrogen. Oxygen becomes liquid at minus 183 degrees, argon at 186, and nitrogen at 196.  Power consumption stands at 8 MW per hour for the entire plant.

The plant is computerised, and alarms are triggered for all discrepancies. The plant can be controlled from both the administration building and the production plant. The advanced instrument containers were supplied fully fitted with all equipment from Germany. These containers are full of instruments which analyse factors such as the air intake and nitrogen, oxygen and compressed air produced.

They also have a separate hall for compressed air. There are three machines here, both compressors and air dryers.

At present, AGA supplies lots of compressed air and oxygen and a little less nitrogen to Celsa. There is a direct pipeline from the new production plant and across to Celsa.

Elin Duus, together with Per Hårderup at the AGA sales department, was responsible for the negotiations with Celsa Armeringsstål AS which led to AGA deciding to build the air gas plant at Mo Industrial Park.