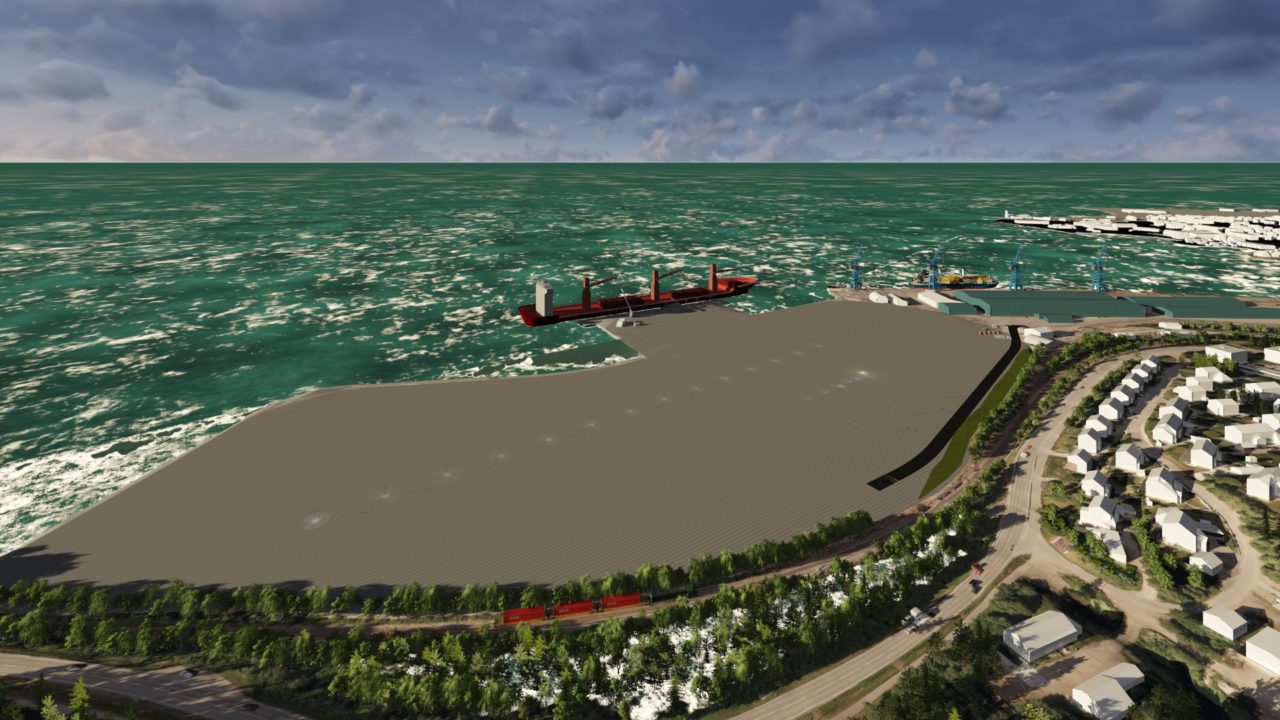 This picture shows what a new deepwater quay would look like, along with its location. The area selected provides an opportunity for large back zones. There is a direct link with the industrial park via the heavy haulage route. The site is close to both the E6 and NSB.

This picture shows what a new deepwater quay would look like, along with its location. The area selected provides an opportunity for large back zones. There is a direct link with the industrial park via the heavy haulage route. The site is close to both the E6 and NSB.

“If we are to have the opportunity for growth and development, we need a deepwater quay for larger ships. This has to be in place and available when decisions are to be made on new enterprises,” says Rolf H. Jenssen, project manager at Mo Industripark AS (MIP AS).

Mo Industripark AS and Mo i Rana Havn KF have worked in cooperation with the municipality of Rana to agree on implementation of a feasibility study which will initially examine partnership solutions for ownership, organisation, financing and concepts for the operation and development of a joint deepwater quay/heavyweight quay for Mo i Rana.

“The pilot project we have worked with deals with the location and technical requirements for a quay with associated infrastructure. Geotechnical surveys with stability modelling have also been carried out, along with environmental surveys in connection with implementation of reasonably extensive dredging. A quay length of either 160 or 200 metres and a sailing depth of 15 or 18 metres are being examined for the quay. Due to heavy structures, it is being examined as a heavyweight quay with capacity for payloads of 10 t/m2. The crane solution we are assessing involves a mobile crane with a lifting capacity of around 140 tonnes. Another environmental measure we are considering will involve constructing a land-based power facility for ships,” says Jenssen.

He is very aware that a deepwater quay has to be constructed in order to achieve even more growth in the region, and that there is already a need for such a quay.

“The need for a quay for larger ships and large back zones has been discussed in a number of contexts relating to new establishment projects. Wasco Coatings Norway AS is a good example of a company requiring such a solution. They have had to resort to costly, improvised solutions for loading and unloading,” explains Jenssen.

He also emphasises that the same is applicable – albeit to a smaller extent – to the engineering industry, which involves loading large, heavy structures onto ships.

Total costs, including the mobile crane and infrastructure, are estimated to amount to NOK 200 to 320 million, depending on which solution is selected in respect of size, sailing depth and design solution.

A development project like this would be a massive initiative for Mo Industripark AS to implement alone. As this is also a Rana project, potential partnership with the Port of Mo i Rana and the municipality of Rana is being investigated.

One of the problems encountered by the project which will drive up costs is a contaminated seabed.

“The pollution in the Ranfjorden has been mapped and investigated over a number of years, and it is clear that this is mainly historical contamination from the previous coke plant and ironworks, the mining industry and contaminated waste from the community as a whole. If the stage fails to accept its responsibility, this will unfortunately involve higher costs for the development work,” he says.

“As regards progress, we are expecting a construction period of 14-20 months once the finance is in place. The public licences have been issued and a contract has been concluded with a contractor,” concludes Rolf H. Jenssen.