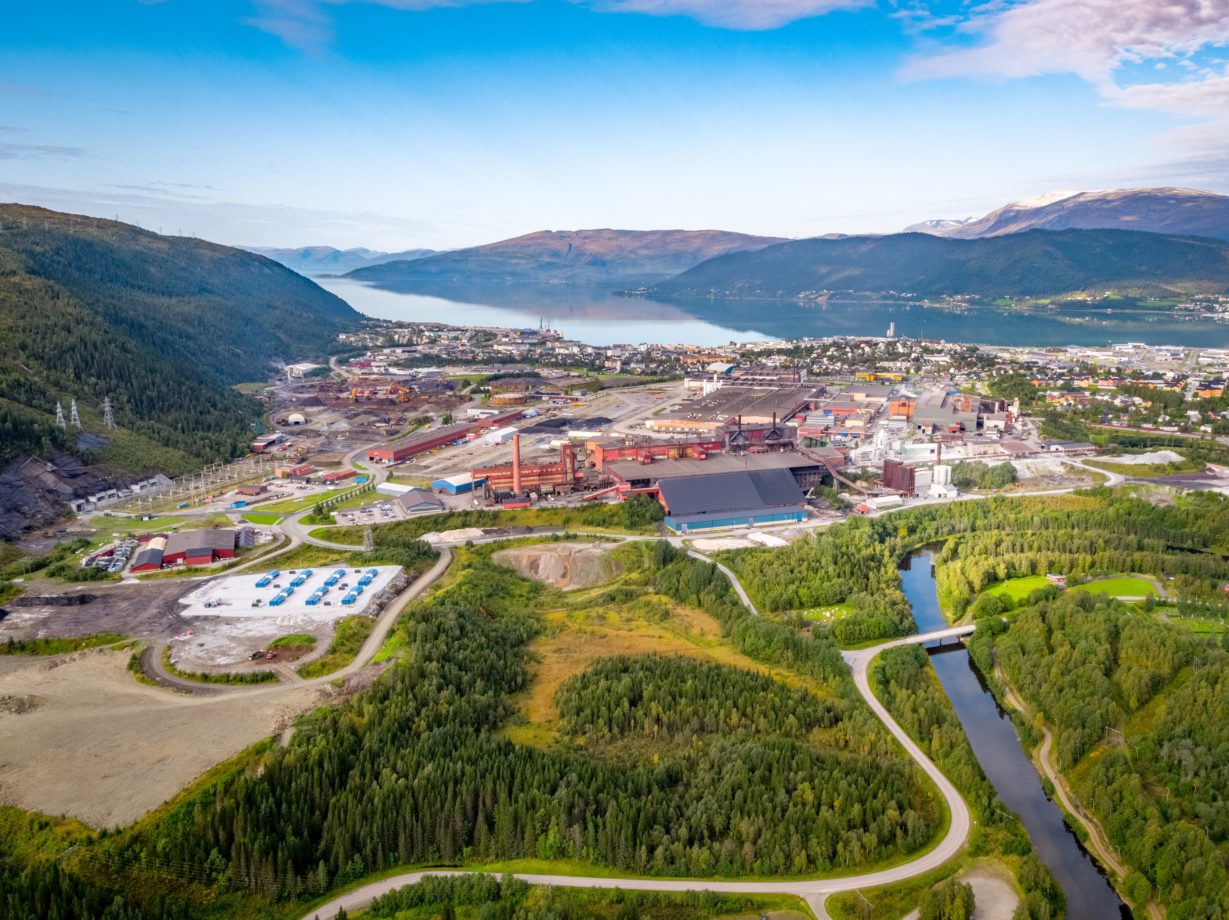 Big plans ahead in the industrial gateway to the Arctic, Mo Industrial Park.

A large-scale plant for green methanol production is being planned in Mo Industrial Park (MIP). The plan involves a large-scale pilot plant for carbon capture and the set-up of electrolysis-based hydrogen production in one of the largest industrial parks in Norway.

Substantial investment
A new innovative technology which has been developed by Swiss Liquid Future AG enables methanol production directly from captured CO2 and electrolysis-based hydrogen (H2). With emission-free hydrogen from electrolysis out of water and captured waste-CO2 originating from certified biological carbon, the plant will be able to produce green methanol.

– Today Methanol is usually produced from fossil sources. Green methanol can be produced without volume constraints, in all locations where CO2 and hydrogen from renewable sources are available. Green methanol will be an important and good addition in a number of transport segments, given that costs are competitive and that significant emissions cuts can be documented, says CEO of Mo Industrial Park, Arve Ulriksen.

The investment in Mo i Rana will be EUR 300 – 350 million for the first production line of green methanol (e-fuel). Further upscaling will be possible both in Nordland and Norway where there is a surplus production of renewable power. In addition to the methanol production, the set up of a hydrogen production plant, which can supply new markets such as the transportation market and support industrial processes and new products is also part of the plan.

Carbon capture plant
The hydrogen needed to produce methanol will be produced using hydropower from the northern Norway surplus region. CO2 will be captured from Elkem Rana’s ferrosilicon production in Mo Industrial Park.
– Elkem is working to increase the proportion of biocarbon in our production process so that all CO2 for the methanol production can be counted as biogenic, says Senior Vice President of Silicon Materials in Elkem, Trond Sæterstad.
The first part of the project will lead to 25-40 direct new full-time jobs in the hydrogen and methanol production. In addition, labour related to the CO2 capture facility will be required. The potential of hydrogen production and the use of CO2 can contribute to hundreds of new jobs.

First plant worldwide on commercial base
The first green methanol project in Mo I Rana has the potential to reduce emissions by 160,000 tonnes of CO2 per year. The plant will produce 100 Million litres of green e-fuel which will lead to 1 Billion km of green car transportation per year.

– When used as fuel, methanol will reduce emissions by up to 94% compared to gasoline, documented in an independent Life Cycle Analysis. In addition, the project will include the first large-scale carbon capture plant from the metals industry in the world. This demonstrates an attractive economic value chain consumption of CO2, being a leading example of industrial symbiosis and circular economy and contributes to new, attractive jobs in Norway. The production of green methanol will be on a commercial base and can also be seen as the starting point for a new business segment in Norwegian industry. This is really a kinder egg, says Ulriksen.

Regulations delay progress
The project largely depends on the legal framework associated with new fuels. In order for this to contribute to emission reduction of greenhouse gases and to progress in the development of carbon capture on an industrial scale, this type of fuel production must be incentivized.

– CO2 transferred from capture facilities to methanol production should be considered 100% biogenic if the CO2 manufacturer uses a similar share of biocarbon in the melting process. We believe therefore that the regulations should enable the allocation of biogenic CO2. This is in line with the climate quota system, which adds all legal responsibility for accounting, reporting and transferring quotas on the emission producer, says Daniel Buchter in Swiss Liquid Future/Mo Industrial E-fuel.

Should get exemptions
The new proposals on road use tax and wagering requirements do not describe how methanol will be treated. This could delay the phasing out of fossil fuels.
– Methanol produced from captured waste-CO2 should be exempt from the road use tax on an equal basis with hydrogen and biogas if used purely in internal combustion engines or fuel cells. Green methanol will be a liquid, pressure-free energy carrier for hydrogen and also utilize a waste stream, CO2, for the production of fuel on an equal basis with biogas produced by organic waste, Buchter says.

Methanol produced from captured biogenic CO2 can also be blended into gasoline.
– Green methanol should also be considered as a biofuel or receive similar benefits as biofuels. This will result in a corresponding road use fee as for bioethanol if the methanol is used in transport sector, says Buchter.

Has been going on since 2017 and is a collaboration between

The partners are bound together by several bilateral and trilateral contracts and/or letters of intent.

Over the past 12 years, project owner SLF has invested EUR 100 million of R&D into the new technology, pilot facilities and development of business models across industries (power generation, commodity production and transportation).

Investment of EUR 300 – EUR 350 million for the first production line in Mo i Rana. Further upscaling possible up to 1 Billion liters production per year in Nordland.

25-40 directly new full-time jobs in hydrogen and methanol production in the first phase. In addition, labour related to the CO2 capture facility. In total, the project can create up to several hundred new direct jobs and a new industrial production sector.