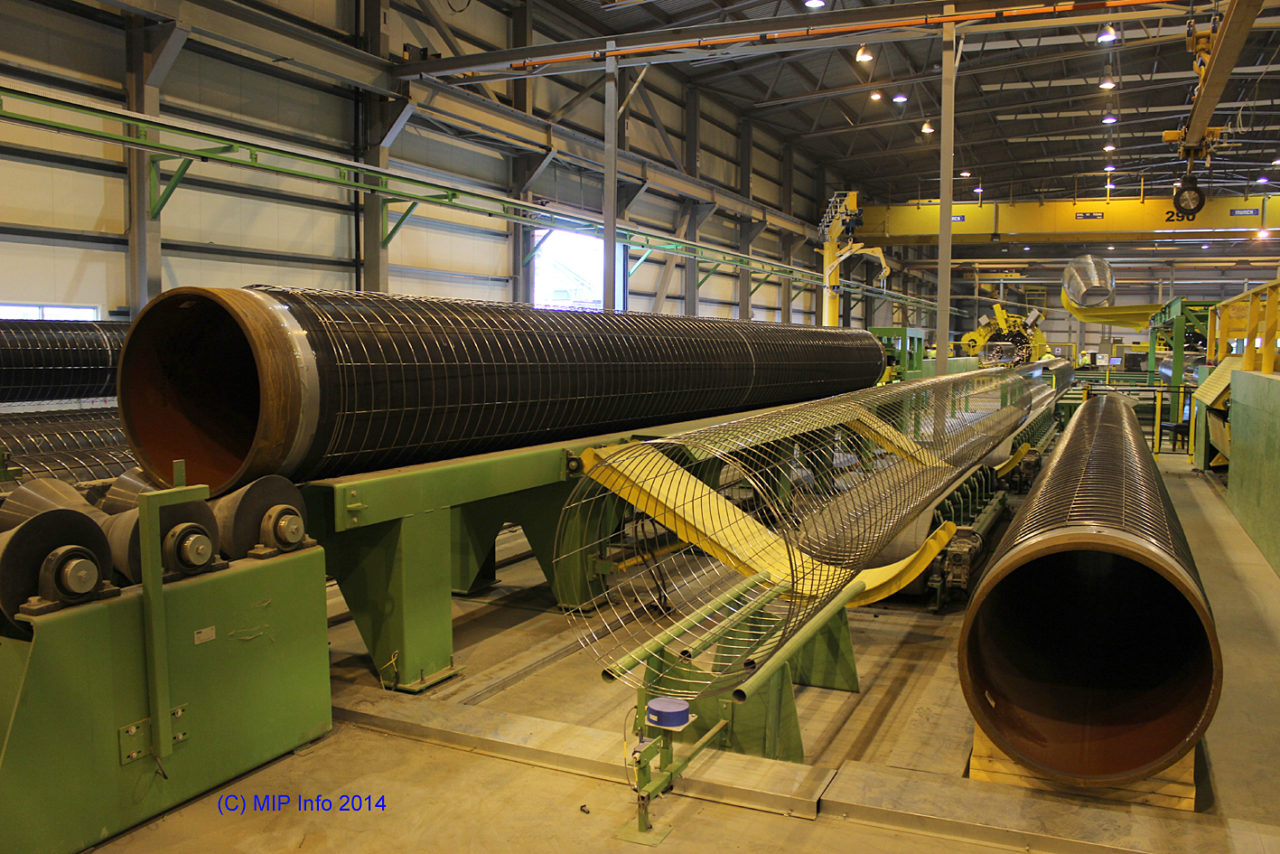 “The very positive reception we received from the industrial environments in Mo i Rana resulted in us concluding a contract of intent for establishment here. This gave us the opportunity to submit a good tender for the Polarled project,” says Colin Mather. The picture shows application of reinforcement at the production plant.

Polarled – a success for Wasco

“We completed the bulk of the order at about the time planned, and feedback from Statoil has been positive. Everything is perfect, and it looks as though this has been a successful project,” says Colin Mather, commercial manager at Wasco Energy and Statoil’s contact for the Polarled project.

11:43 on 17 April saw the coating of the last few pipes with concrete for the Polarled pipeline at the Wasco Coatings Norway AS production plant in Mo i Rana.

Gule Sider took the opportunity to get a summary of this first major project for Wasco Coatings Norway AS in Mo i Rana.

“Essentially, we can say that Wasco Coatings Norway AS was established in three phases,” says Colin Mather.

He explains that the first phase involved determining where to locate a production plant in Europe, ideally in Norway. After thorough surveys, Wasco Energy – the parent company – got in touch with Mo Industripark AS.

“The very positive reception we received from the industrial environments in Mo i Rana resulted in us concluding a contract of intent for establishment here. This gave us the opportunity to submit a good tender for the Polarled project,” he says.

Standard procedures for the tendering work were executed at head office in Malaysia, as the company has plenty of experience of this. The new aspect of this project involved adapting the tender for establishment of a new enterprise in Mo i Rana, with all the benefits and challenges that entailed.

“For us, it was important to profile a comprehensive tender which could give Statoil the opportunity to establish a solution with great effects in Norway. The solution that we presented to Statoil turned out to be really good, and we were assigned the pipe coating order for Polarled in February 2013,” explains Colin Mather.

The second project phase involved devising a good solution for a new concept for shipping pipes from the production plant in Japan, taking them on to Malaysia for plastic coating and then up to Mo i Rana for concrete coating. Part of the overall solution also involved the concept for transporting the pipes into the field in the summer of 2015, when the assembly of the entire pipe length would take place.

“This work went very well, and it was something we did in close cooperation with Statoil,” he explains.

Once the contract had been concluded, it was decided that half of the pipes would be stored in advance in Kristiansund as this would optimise operations when laying the pipes from Nyhamna, where it all started.

Colin Mather explains that this was a challenge in itself as it all took place in the middle of winter.

The third phase involved the construction of the production plant at Rana Industriterminal, along with commissioning and implementation of the project. A total of 40,000 pipes had to be concrete-coated in Mo i Rana.

“This project was a major step for us at Wasco, with the construction and commissioning of the plant, recruiting staff and cooperation both in-house and with suppliers in Mo i Rana,” says Colin Mather.

The start of production at the plant was decided upon as a result of the flow throughout the entire project, from production of the pipes, coating them in plastic at the plant in Malaysia, and shipping up to Mo i Rana.

“Being able to demonstrate that we implemented all our plans, not least because production continued throughout the entire winter up here in northern Norway, was very positive for us. Everything went very well and completely according to plan. This proved that we could get the job done, and that the plant was able to do precisely what we built it to do,” says Mather.

At its peak, almost 300 people were working on the project. The working language was English, and Colin Mather says that everyone dealt with this very well. The teams included staff from no fewer than 24 different nations. Most people were Norwegian, and most staff lived in the Rana region.

Unemployment was low in Rana, so Wasco were a little concerned about whether they would be able to recruit enough skilled staff for the project from the Rana region.

“We did not want to have to employ lots of people from outside, as this would mean them having to live in barrack huts. But as it turned out, we were worrying unnecessarily. Lots of talented staff have worked for us, and the community has also benefited from this thanks to more people having jobs and more tax being paid,” says Colin Mather.

The employees also included people who live in Mo i Rana and were granted residence permits as refugees. They received work experience at Wasco, benefiting the company, these individual employees and the local community as a whole.

“This proves that they are a resource in the local community when we can help by providing jobs for them,” he says.

Mather explains that the last few weeks have been the most efficient in purely production terms. Staff had got themselves into a good working rhythm, and most things were done almost automatically.

“It just goes to show that when people feel secure in their work and their skills, production goes a lot more smoothly as well,” says Colin Mather.

They are now preparing to ship the remaining 20,000 pipes. These have to be cleaned first by passing them through the production line without concrete coating, and finally cleaning them in a separate cleaning station. The pipes will be laid out in the warehouse in the order in which they are to be shipped.

When the supply ships arrive to collect the pipes, they have only two to three hours between the ship docking and the ship departing. The supply ships will be operating regularly from the field and into the port at Rana Industriterminal 24 hours a day, seven days a week, from mid-June until the shipping stage is completed in August.

At present, three supply ships are operating round the clock to ship pipes from the advance warehouse in Kristiansund to the field, where good progress has been made on laying the pipeline. Six supply ships will be operating round the clock from the port in Mo i Rana, and a supply ship will dock every two hours. They will be carrying a total of 350 to 400 pipes out into the fjord every day, and four to five kilometres of pipeline will be laid every day under normal weather conditions.

Wasco is now working on bringing in new orders for its plant in Mo i Rana. In Norwegian waters, the Johan Sverdrup field is the next in line.

“We are pleased to have the opportunity to submit a tender for this project,” says Colin Mather, adding that they are also looking at all other potential projects in the north.

According to him, the production plant in Mo i Rana has been built to operate for many years to come. This is a plant for offshore pipelines. Wasco has other production plants, such as the one in Malaysia, for coating other types of pipe.

The Polarled project was the trigger for the construction of the plant in Mo i Rana, and of course they hope to be able to utilise the plant for further work for the Norwegian market and the market in the Arctic area thanks to the framework contract they have with Statoil.

“We would like to help develop trade and industry in Norway, particularly in the region,” he says.

He explains that the Wasco plant has added a lot of value to the local community and the region as a whole in the form of salaries, taxes and work for subcontractors, compared with other, similar projects.

“Our contribution in this respect has actually been unusually extensive, compared with other such plants,” says Colin Mather.

He says this is because there are plenty of skills and materials available both at Mo Industripark and in the region as a whole. The staff in Rana have broad industrial experience, and steel, cement and various mixing materials such as gravel, sand and suchlike have been purchased locally.

“Everything we need has been available in the Rana region, so we have not needed to buy in such products and services from outside. This was another important reason as to why we chose to build the plant here,” concludes Colin Mather of Wasco Coatings Norway AS.