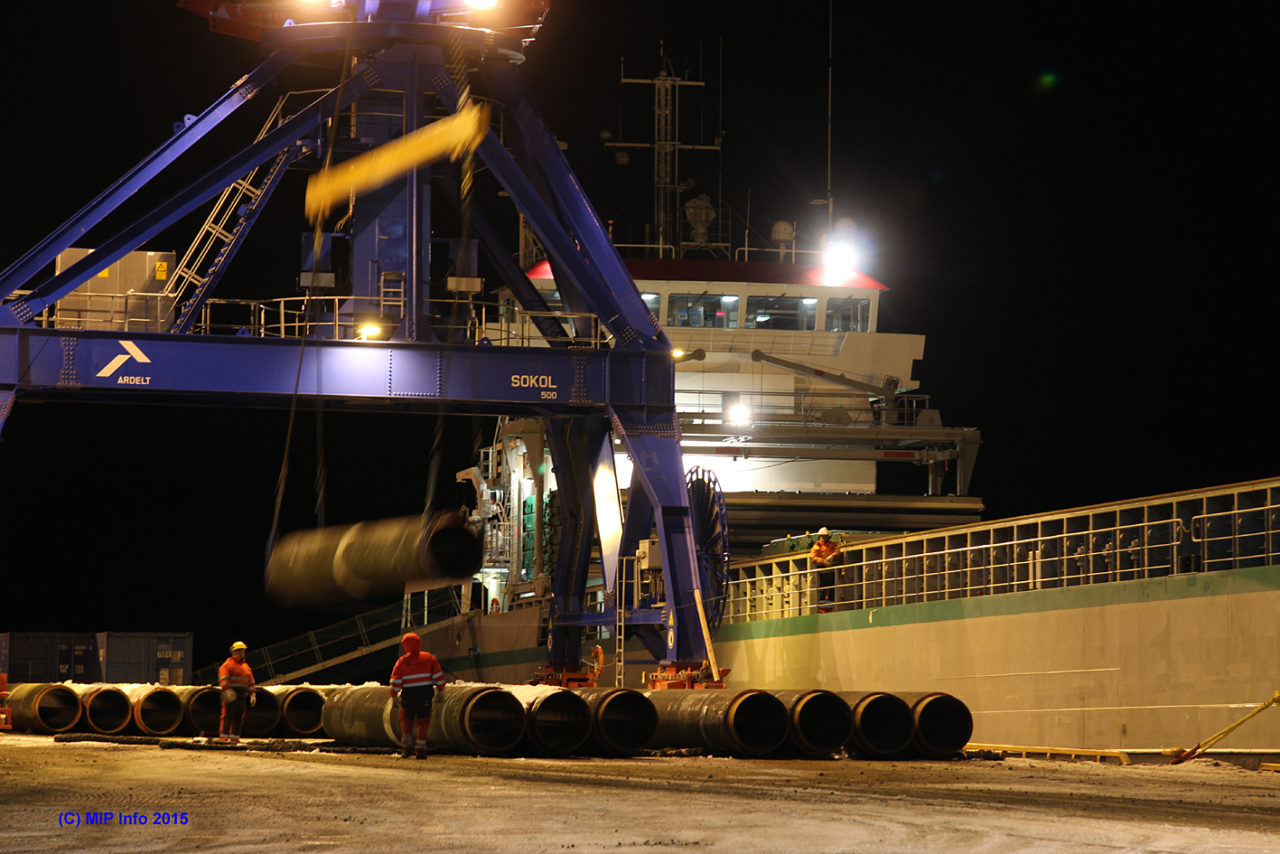 – Twice the normal cargo volume was brought ashore at Rana Industriterminal (RIT) at the end of 2014. Week 48 saw record levels of activity with more than 80 thousand tonnes, a weekly record for RIT. I am very impressed with the flexibility and adaptability shown by our employees and with how they have managed to keep going in 2014. I’m proud to be managing such a great team, says Pål Høsøien, General Manager for Rana Industriterminal AS.

Rana Industriterminal has seen intense activity since the beginning of November 2014 right up until the end of February this year. Every day, seven days a week, approximately 4,500 tonnes of coated pipes for Wasco Coatings Norway AS have been shipped to Averøya near Kristiansund, on top of the regular tonnage. This means that this winter, half of the 40,000 pipes produced for the Polarled pipeline will have been shipped to Averøya for storage due to the fact that the work on the pipeline will begin in the south. The last ship sailed on 25 February and 60 ships were loaded with pipes in total.

The learning curve has been steep for all those involved ever since the first pipes arrived in Mo i Rana from Malaysia in March 2014. It took nine to ten days to unload the first ship while those that arrived later took just six or seven.

– Some were sceptical as to how it would work so far up north, but it all worked out brilliantly in the end, even in the toughest of weather conditions as we saw around New Year, remarks Høsøien.

In order to be able to get this work done within the time frame established, the management and the employees entered into an agreement on the introduction of a temporary three-shift rotation, with weekend duty. Rana Industriterminal normally operates a two-shift rotation with weekend stoppage.

Another important reason behind the introduction of the extraordinary shift rotation, aside from the time issue, was that Wasco Coatings Norway uses some of its production machinery and equipment in the daytime, between 06.00 and 18.00, six days a week. As a result, it was not possible to load the ships between these times.

RIT therefore loaded the ships between 18.00 and 06.00 every day, which lead to a need for additional staff particularly on the night shifts for Rana Industriterminal AS and Mo Loading and Unloading Company.

Normal quay operations continued for the other customers with scrap and raw materials being brought ashore and finished goods being shipped for fixed RIT customers such as Celsa Armeringsstål AS, Fesil Rana Metall AS and Glencore Manganese Norway AS, among others.

Pål Høsøien also testifies to the clear HSE focus of all those involved which lead to there being zero serious or dangerous incidents relating to employee safety. Through their focus on HSE, Statoil and Wasco have contributed to valuable experience for RIT.

– The employees have done a great job, not least considering the challenge posed by temporary situations that call for adaptations to working hours. People have been very understanding and positive about us being able to cope well with this challenge. I think the entire organisation has found this project exciting and I also believe that everyone has enjoyed the challenges, even if things have been very hectic at times. The whole team has done a brilliant job, especially in busy times, concludes Pål Høsøien of Rana Industriterminal AS.

In addition to the coated pipes that have been shipped, two pipe shipments containing a total of 75,000 tonnes were also received in January and February 2015. The final incoming shipment, containing some 27,000 tonnes, will arrive in Mo i Rana in the first week of March. Once it has arrived, all pipes for the Polarled gas pipeline project will have been brought ashore.

Aside from this, RIT AS is seeing normal levels of activity in other industry companies in Mo Industrial Estate. This also means that the first few months of the year represent an exceptionally busy time for the employees at Rana Industriterminal AS.

The next period of intense activity will be in the summer when the remaining 250,000 tonnes of pipe are to be loaded onto supply ships sailing directly to the pipe laying ship extending the pipeline to the Aasta Hansteen platform.