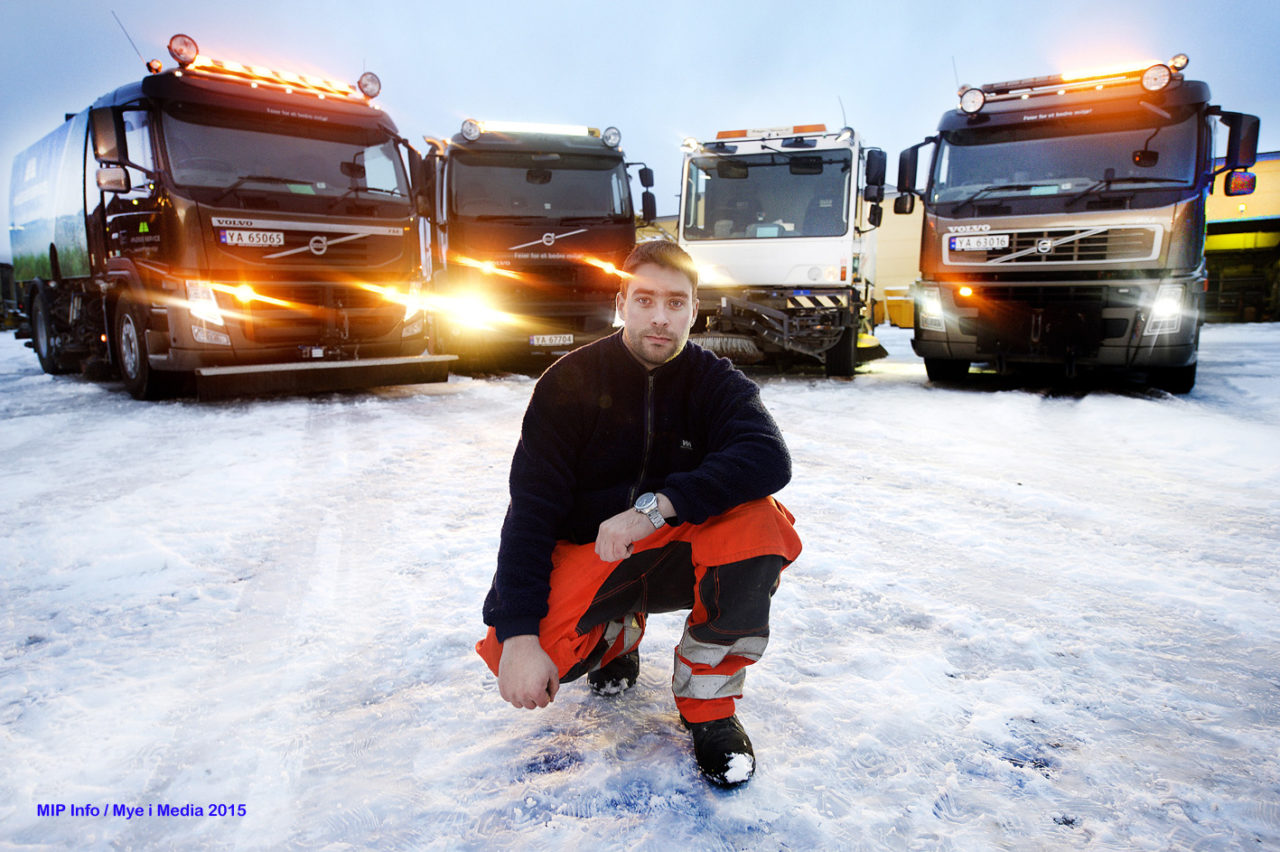 With the new Anleggs-Service vehicle in place, Reidar Lillejord has exactly what he needs in order to sweep up dust in all weathers.

First in Norway with new tool to counteract floating dust

When Reidar Lillejord sits at the wheel of the new street sweeper belonging to Anleggs-Service AS, he is BATman in the battle against floating dust.

Lillejord is one of the drivers operating the fleet of street sweepers belonging to Anleggs-Service. This fleet was extended recently, from four to five sweepers. The latest addition is a brand new tool in the fight against floating dust at Mo Industrial Park: a street sweeper that vacuums the ground.

This technology is the best available on the market. Best Available Technology. Or BAT, as the professionals call it.

“Traditional sweet sweepers are based on water. The new vehicle uses a technology in which a vacuum creates a suction effect. This will allow us to clean the roads even on cold, dry winter days. We have not been able to do anything on days like this in the past. Vehicles using water do not work well when the temperature is below zero,” says Kjell Magne Nilsen, operations manager at Anleggs-Service.

“We follow a carefully planned sweeping programme devised in consultation with MIP AS, and we are very pleased that they are so forward-looking when it comes to taking on board new methods in order to limit dust contamination. The fact that this work has high priority with our client makes it possible for us to invest in tools such as a new street sweeper,” says Kjell Jens Lund, general manager at Anleggs-Service.

Anleggs-Service has invested more than NOK 4 million in this new vehicle, which was produced and supplied by Disab Vallentuna of Sweden. This vehicle is the first one with the new technology to be supplied to Norway.

“What we have done is build a modern street sweeper on a Volvo chassis. Unlike the traditional street sweepers, which are fitted with brushes and water, this one is fitted with something resembling a vacuum cleaner. The suction effect comes about through establishment of a vacuum that can lift a weight of up to 1600 kilos. The dust is sucked up, passes through filters and ends up in containers which separate the coarsest dust from the finest. Both PM10 and PM2.5 is picked up,” says Mathias Bergström, development designer at Disab Vallentuna.

“In total, we have supplied around 10 vehicles which use this technology. Some of these vehicles have been sent to Stockholm, and we have received feedback stating that it is now felt that floating dust is under control. This is due to the use of this vehicle in combination with traditional street sweepers and the use of binding agents on the road,” says Bergström.

Greater knowledge, greater emphasis and intensification of efforts to prevent dust contamination are the reasons why Anleggs-Service decided to invest in a new vehicle. Disab are hoping that the Rana company is the key that will open the Norwegian market to them. And as Bergström visited Anleggs-Service a few days ago in connection with the handover of the vehicle, delegations from both Trondheim Bydrift and the municipality of Bodø headed over there to look more closely at the vehicle.

“It is quite funny that Trondheim Bydrift is coming to us to learn things now. A few years ago, when we began scaling up our efforts against floating dust, we visited them in order to learn things,” says Kjell Magne Nilsen.

Anleggs-Service came into being as part of the restructuring work when Norsk Jernverk closed down. General manager Kjell Jens Lund has been with the company since 1991. He has witnessed rapid development over the past decade. With the last vehicle in place, the company has now invested a total of NOK 14 million in street sweepers alone.

“We have seen a massive increase in activity here as people focus more closely on floating dust. About 20 years ago, we had one street sweeper that operated around four hours a week. We now have five vehicles that operate 12 hours a day on average, and at times they operate round the clock,” says Lund.

“People did not just ignore dust completely in the old days, they just used different methods. At that time, a lot of the road network was hosed down by the fire service. But with greater knowledge and emphasis, so our methods have changed,” says Lund.

However, the new Anleggs-Service vehicle will not make the other four vehicles in the company’s fleet redundant. The new vehicle will work perfectly well on cold, dry days. The vehicles with brushes and water will have to do the job in other weather situations.